Tapper Zukie after taking a little time out of the musical arena has come back with an album full of great material and has called in an A list of fellow Jamaican artists to add flavour to this great set.

As Tapper named the album himself ‘Bunker Buster’ it shows Mr Zukie busting back out of the studio and back in the arena in fine style. The opening track finds his long-standing working partner Horace Andy adding his distinctive vocal style to ‘Aquarius’. ‘Nuh Fraid A Dem’ features the great Luciano, ‘The Blessings’ the mighty Michael Rose, and Little Roy adds some magical rhymes to ‘Wicked’. The soulful voice of Beres Hammond sweetens the effects of `Stress’. The killer title track `Buster Bunker’ is backed up by the Musical Intimidators and Tapper has reworked his ‘Good Luck My Friend’ track to ‘Lucky Friend’ which features the timeless backing vocals by the legendary Jamaican vocal group The Tamlins. Digging even deeper into his back catalogue he has also pulled up some classic rhythms and more existing vocals to rework over. For example, ‘The Light In Me’ features the greatly missed Ronnie Davis. Junior Rass adds his mighty roar to ‘Humble Lion’ and Junior Reid leads the charge on ‘Warrior’. Half Pint adds a musical layer to Flesh and Blood. All in all a great selection of musical ideas that also features the cream of Jamaica’s musicians, Sly Dunbar and Robbie Shakespeare, Flabba Holt, Chinna Smith to name but a few. Tapper’s son Noel Barnes (AKA Brand New) alongside Pam Hall adds some gloss to the CD edition of this release. Such is his standing in the reggae community that a call out to Jamaica’s finest set of singers and their eager reply to add their talents has made this an album not to be missed and can sit proudly alongside and find a place in his already prodigious catalogue. 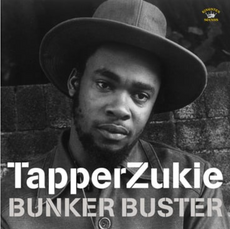