‘Dig Me Out’ is the third studio album by Sleater-Kinney, originally released on April 8, 1997 by Kill Rock Stars.

The album was produced by John Goodmanson and recorded from December 1996 to January 1997 at John and Stu's Place in Seattle, Washington. ‘Dig Me Out’ marked the debut of Janet Weiss, who became the band's longest-serving and last drummer. The album has been freshly remastered by Greg Calbi for this release. This reissue coincides with Sub Pop’s 2014 release of remastered versions of Sleater-Kinney’s six other albums, as well as a limited-edition, deluxe vinyl box set featuring all seven albums. 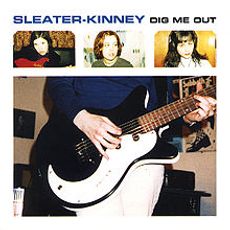