this features Bowie performing five songs that were written for German playwright Bertolt Brecht’s 1918 play ‘Baal’, previously only recently made readily available as part of a big old box set.

Bowie recorded this EP with Visconti at Hansa Studios in Berlin in November 1981. Recently, all five songs were re-released as part of the exclusive ‘Re:Call 3’ compilation that accompanied the boxed set, ‘A New Career In A New Town (1977-1982)’. 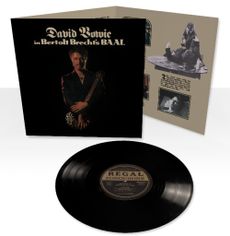