previously only available as a limited record store day release, these 12 original tracks are based on wayne coyne’s psychedelic art installation of the same name & threaded together by cinematic narration courtesy of The Clash’s Mick Jones.

Introduced in 2015, the installation has showcased its psychedelic visuals & soundscapes through North America in museums & Wayne’s own creative space, The Womb, in Oklahoma City, OK. A true handcrafted marvel, it consists of a giant metallic head that welcomes spectators inside. Once inside of the foam mouth, an LED lightshow begins in tandem with music from the album. Now, the record doubles as the sonic companion to the exhibit & allows fans to experience the aural side at any time. “a quaint magic often unfolds, lipsian splashy drums, mellotron chorales & flower-power melody all part of the spell” – mojo. 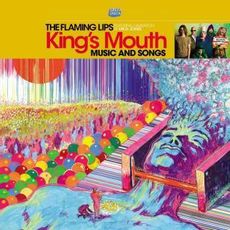