The Melburnian troupe prove that their skilful lasso-ing of summer’s long heavy nights on their debut was no fluke - this follow up is just as suitably sun-kissed & dreamy but now with the addition of intimate tales of love & strife to boot.

After years spent looking out at landscapes and loved ones and an increasingly unstable world, rolling blackouts coastal fever have turned their gaze inward, to their individual pasts and the places that inform them, on their second full length, ‘sideways to new italy’. Early attempts at writing big, high concept songs about the state of the world were abandoned in favour of love songs, and familiar voices and characters filter in and out, grounding the band's stories in their personal histories. FFO: The War On Drugs, Diiv, Television, Bruce Springsteen “‘Sideways To New Italy’ makes up a unique time capsule that’s engineered as much to thrill their audience as to indulge the band’s own sentimentality.” 7/10 - Loud & Quiet.

Derry says: “Follow up to my favourite album of 2018 & it doesn't disappoint. If this doesn't make you want to be travelling the Great Ocean Road with the top down, nothing will.” 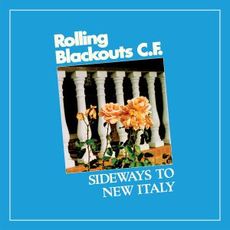