A cult icon, The Space Lady has been performing her delicate, celestial songs for over 30 years & yet she is only now being heard by many a keen ear around the world.

'Major Tom / Radar Love' is released on limited 7" with download, via Night School Records. The Space Lady began her odyssey on the streets of Boston in the late 70s, then San Francisco ten years later, playing versions of contemporary pop music with an accordion & dressed flamboyantly, transmitting messages of peace and harmony. Following the theft and destruction of her accordion , The Space Lady invested in a then-new Casio keyboard, complete with a phase shifter and headset mic, birthing an otherworldly new dimension to popular song that has captured the imaginations of the underground and its leading exponents ever since.  The Space Lady continues to spread her message of peace, harmony and love. 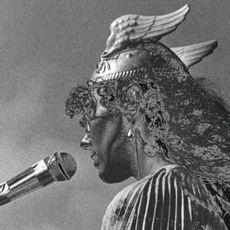