"Moiré appeared on our radar with his 'Never Sleep EP', a slice of murky, machine-built techno that drew plenty of comparisons with his label boss. Another EP followed on Rush Hour before the faceless producer turned in a stargazing FACT mix – highly recommended. here he returns to Werkdiscs for a 3-track 12″ led by ‘BBOY 202′. The woozy techno cut was conceived as a response to ‘Lose It’ (from 'Never Sleep'), with the producer “revisiting & reworking familiar sounds in a way to create something raw, immersive & driving”, according to his label. The same concept lies behind ‘False’, while “drawing on the sampling aesthetic of hip-hop” & “driven by the need to feel something faster” & final track ‘Window’ is the result of a late night toying with a Jupiter 8 in a Hamburg synth studio. 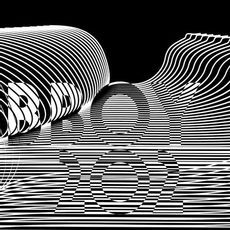