'DIAMOND DOGS' was the 2nd single to be taken from the album of the same name with 'REBEL REBEL' being the first, the ground breaking 6 minute track was originally backed by the re-recording of 'Holy Holy'. For its 40th anniversary it is issued as a double A side with the 'DAVID LIVE 2005 mix' by Tony Visconti making its vinyl debut. The image on the A side of the picture disc is an outtake from the famous session shot by photographer Terry O'Neill & the AA side features a previously unseen image from the 1974 US tour. 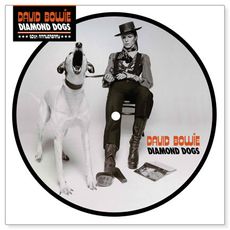