I want to do more / mama he treats your daughter mean

Brown was one of the most important & influential rhythm & blues artists of the 50s, with a rich, expressive singing voice & a personality to match. 'i want to do more' is a plaintive expression of devotion written by Jerry Leiber & Mike Stoller while '(Mama) He Treats Your Daughter Mean' is a 1953 song written by Johnny Wallace & Herbert J Lance which became Brown's 3rd number one on the R&B chart. 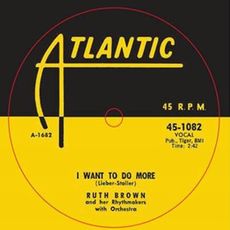