'Feed The Mantaray' shows Slaves’ surreal & hilarious side backed up by their trademark monstrous riffs.

The song explodes into your consciousness reflecting the slap in the face their songs are currently delivering to the drab atmosphere of Austerity Britain. The 7” comes with two B sides which won’t appear on the album – ‘OK’ and ‘I Shine My Shoes With A Dirty Vest’, the latter of which they wrote and recorded in Laurie’s flat and also appears on a Slaves TV episode. As ever, the wacky artwork is designed by the band. 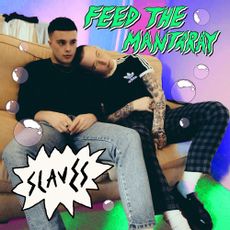