Part of Rhino’s now-celebrated Side By Side 7” singles series.

Two artists perform the same song. Surprising and unusual performances and repertoire. Gram Parsons pioneered the concept of a rock band playing country music, blending the two genres to the point that they became indistinguishable from each other. While he was alive, Parsons was a cult figure that never sold many records but influenced countless fellow musicians, from the Rolling Stones to the Byrds. In the years since his death, his stature has only grown, as numerous rock and country artists build on his small, but enormously influential, body of work. (via AllMusic) The Lemonheads' evolution from post-Hüsker Dü hardcore punk rockers to teenage heartthrobs is one of the strangest sagas in alternative music. Initially, the group was a punk-pop trio formed by three teenage Boston suburbanites, and over the years, developed into a signature blend of pop, punk, and country-rock. (via AllMusic) Format: 7” 45 rpm. Circle swatch splatter bronze on baby pink. 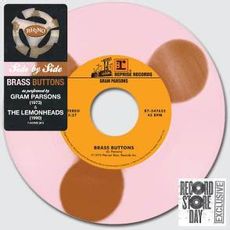