Our Daughter’s Wedding were one of the most underrated American electronic bands of the early 80’s and ‘Lawnchairs’ is perhaps the proof.

So it is, for the first time since its original release, FUTURISMO give you this incredible reissue for Record Store Day on Limited Edition 7” Picture Disk. In 1980 this was the sound of the future, one that still hasn’t quite come to pass, ODW were distinct in that they employed a punchy, energised and even slightly aloof take on electropop, one that stayed true to their punk and rock ‘n roll upbringing, an authenticity that drove them to play all electronic instruments live without the aid of any sequencers. Our Daughter’s Wedding have posthumously been described as Synthpunk, along with other early innovators such as Units and Screamers, yet despite this, they knew how to write a pop song. ‘Lawnchairs’ instated them in the clubland etha by becoming a instant dance floor hit, reaching No.1 in all US college and indie charts and championed by the music press in the UK, making the singles chart (hence tours with Duran Duran and The Psychedelic Furs)…and it’s easy to see why, as the track appealed to those who sought those commercial hooks pop demands, as it did those who appreciated it’s more avant garde edge and experimental sensibilities. ‘Lawnchairs’ became the bands trademark and it remains a high point in the history of the synthesized pop. For a limited time only FUTURISMO give you the opportunity to own a part of that history. Including the superior original version of ‘Lawnchairs’ and the original B-side ‘Airline’, this 7” picture disk is part shaped image / part ultra-clear vinyl and is set against a printed insert, neatly housed within a clear heavy plastic sleeve with flap. Also included is a free download of both tracks. 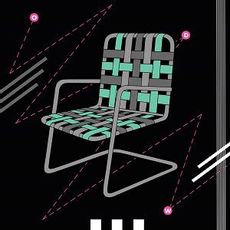