Acclaimed as one of as the UK’s best and certainly most unique male soul singers, CHRIS BALLIN returns with a brand new masterpiece, exclusive here to vinyl on this year’s Record Store Day.

Chris has recorded and performed live extensively over the past two decades (including with Incognito and Omar), and fell in love with this composition by Omar’s percussionist KARLOS EDWARDS while considering his return to the studio as a solo artist. Expansion first worked with Chris in 1993 on his single “Stay Away From You”, then again in 2000 when he featured as a lead vocalist with Innershade on their album “4 Corners”.“Endlessly” reunites Chris with ERROL HENRY who produced the Chris Ballin album “Do It Right” in 1996 and has acted in an executive role here to ensure the highest standards. Chris Ballin, Errol Henry and Expansion Records combine here for a piece of soul magic. It comes complete with bonus track “Cry”, a song which when first reviewed in Blues & Soul Magazine (by Steve Hobbs) in 1996 was described as being ‘perhaps the finest soul record ever to come out of the UK’ 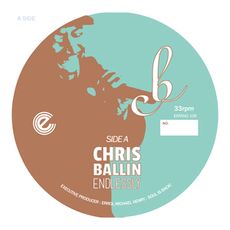