37 years later this is fresh UK Diy post-punk, compelling pop with a dark heart, vacillating between the pretty disturbing & the disturbingly pretty.

LEER is an innovative electronic musician from Port Glasgow, Scotland who, in 1977, moved to London where he fronted PRESSURE, a Clash-esque punk group with fellow experimental Scottish musician ROBERT RENTAl. After hearing Kraftwerk, Leer became interested in synthesizers - not long after, he was exploring the experimental techniques of Eno, Zappa, Beefheart, Faust & Can. In 1978, Thomas released his first single, 'Private Plane'/'International' on his own Oblique Records. So as to not wake his sleeping girlfriend, Leer's vocals were nearly whispered, which lends them a textural, psychedelic quality. NME named “Private Plane” Single of the Week, and the hand-stamped first edition of 650 promptly sold out. For this expanded reissue, there are 2 bonus tracks. 'Kings of Sham', from the 1981 Cherry Red Records sampler 'Business As Usual', is perfect motorik trance, echoing Conny Plank's 1970's productions. 'Saving Grace' is the extended instrumental version of Leer’s second single 'All About You' from 1982, a slow -burning cosmic work-out chock-full of anthemic synth riffs. 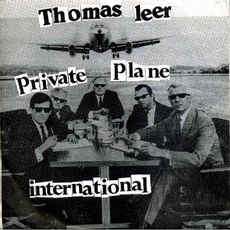