“2016 - My Generation”: a momentous comeback for Mirwais, two decades on from his classic “Production” album.

It all started in 2016 with an idea Mirwais had for a music video to promote his upcoming single “2016 - My Generation”. The idea led Mirwais and co-founder of graphic design studio H5/creator of the Oscar-winning “Logorama” animated short Ludovic Houplain to work together on a fascinating ten-minute short entitled “My Generation”. Since its 2017 release, the film “My Generation”, produced and scored almost liturgically by Mirwais, made the rounds of festivals, winning several prizes worldwide. It presents itself as a backwards travelling shot during which all of our pop culture moment’s gimmicks collide at 100 km/h: sex, the net, art, politics, sports, stocks, big pharma and big porno – from Hitler’s speeches to Trump’s contemporary analogues. Flash forward to 2020, and it is this very six-minute pop-litical critique of our era’s societal excesses that Mirwais chose as the music video for his new single “2016 - My Generation”, set to be released during the coming fall’s American presidential election. A sonic deflagration that heralds a new album from one of Madonna’s most iconic collaborators, succeeding, two decades later, the now-classic “Production”. A punchy, percussive single poised between hard techno and electronic disco, sprinkled with choirs and distorted, psychedelic synths “2016 - My Generation” is a dance floor-ready opus bearing Mirwais’ inimitable signature. This way of mixing genres, of conjugating past and future, and of making pop experimental and vice-versa, cements Mirwais’ reputation as one of times’ most singular composers. 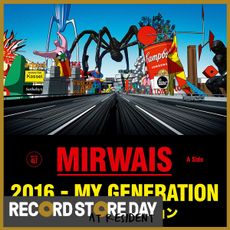