Dispatches From Elsewhere (Music From The Jejune Institute)


Dispatches From Elsewhere (Music From The Jejune Institute) is a meticulously crafted electronic score, composed for the AMC show by Atticus Ross, Leopold Ross & Claudia Sarne.

“Music From The Jejune Institute” and “Music From The Elsewhere Society” both represent opposing factions in the series. The score is pressed on black vinyl and housed in a deluxe spined sleeve with printed insert and download card included. Atticus Ross is an English musician and producer who has been living and working in Los Angeles since 2000. His move from records to include working in film started in 2010 with The Book of Eli and The Social Network. Along the way he has won a number of awards including the Grammy, the Oscar, the Golden Globe, the Critics’ Choice and the Ariel. He is also a member of the band Nine Inch Nails. Leopold Ross is an English composer whose scoring career began with the Hughes Brothers The Book of Eli. He has gone on to score numerous films and TV shows, working with many notable directors including Michael Mann (Blackhat), Harmony Korine (Caput) and more. Claudia Sarne is an English musician, composer and songwriter who lives and works in Los Angeles. Her music is featured on work with leading contemporary female artists such as Tierney Gearon and Polly Borland. She collaborates extensively with Atticus Ross and Leopold Ross. Created by and starring Jason Segel, “Dispatches From Elsewhere” is an original anthology series centered around four ordinary people who feel there’s something missing in their lives, but they can’t quite put their finger on what it is. This diverse foursome is brought together by chance – or perhaps it’s by design – when they stumble onto a puzzle hiding just behind the veil of everyday life. 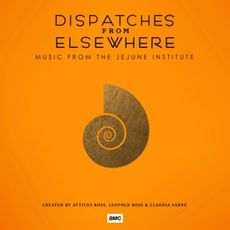