One of the finest country singers of all time, Waylon Jennings ranked No.

7 in Rolling Stone magazine’s poll of 100 greatest country artists.  In a 37 year recording career Waylon achieved 100 country chart singles and 60 chart albums.  He led the “Outlaw” music movement of the mid1970s together with Willie Nelson and Tompall Glaser.  Waylon hailed from a dirt farm on the outskirts of Littlefield, a small town on the Texas side of Highway US-84 that ran from Lubbock across state into Clovis, New Mexico, two significant music towns.  He was born Wayland Arnold Jennings on 15th June 1937 but, due to a mistake by a Baptist preacher, the name was recorded as Waylon.  Waylon played bass guitar for Buddy Holly on the illfated “Winter Dance Party” tour in 1959. On 3rd February 1959 he famously gave up his seat to The Big Bopper on the private plane hired by Holly. The plane crashed that night killing Buddy Holly, Ritchie Valens as well as The Big Bopper.  Waylon Jennings was inducted into the Country Music Hall of Fame in 2001.  He died of diabetes on 13th February 2002.  These 4 albums on 2 CDs were recorded between 1970 and 1972 and are available for the first time in this format. 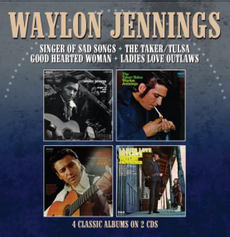