This features nine artists who recorded for the Kent-Modern labels and contains material from the early to mid-60s. The songs are heavily influenced by the pacesetting presence of B.B. King, rhythm and blues, funk and social consciousness in the lyrics as the civil rights movement brought change and turbulence. There’s some pretty rare stuff here, as most tracks are new to UK CD. Eight have only been released on limited editions of 300 by P-Vine in 1999, while seven are completely unreleased. 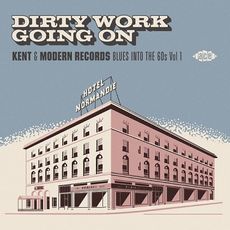