Joe Bonamassa has always talked with an incredible fondness for the late great legendary producer Tom Dowd, who has a stellar discography, a veritable who's who of Soul, Rock and Blues superstars.

Joe was obviously thrilled when Tom signed on to produce his first solo album, A New Day Yesterday, twenty years ago. However, as time has gone by, Joe's vocal style, particularly, has changed enormously. He's grown from an adolescent shouter to a very mature and soulful singer. To celebrate the 20th anniversary of "A New Day Yesterday", Joe wanted to re-do all vocals without losing the original feel of the record. This re-release comes with 3 bonus tracks, produced and written with Steven Van Zandt, the legendary guitarist from Bruce Springsteen's E-Street Band. To complete the new package, the album has been rebranded with an appropriate title: A New Day Now - 20th Anniversary Edition. 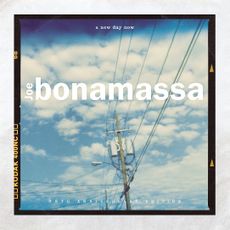