Michael Landau will be releasing his brand new album 'Liquid Quartet Live' on 21st August via The Players Club, a division of the Mascot Label Group.

The album was recorded live at the world-famous Baked Potato Jazz Club in Los Angeles in November last year with his Liquid Quartet line-up of drummer Abe Laboriel Jr (Paul McCartney), bassist Jimmy Johnson (Alan Holdsworth) and on guitar and vocals, David Frazee (Burning Water). The intimacy oozes through the record, from the soft chitter-chatter, to the whoops, cheers, and "yeah" delights of the crowd. It's almost as if you are transported to one of the tightly packed tables in the front of the stage, soft lighting above your head watching the quartet perform in front of the back wall that's adorned with gig posters. The setlist features outings of some brand new songs (Well Let’s Just See, Can't Walk Away From It Now) as well as some inspired renditions from his back catalogue; from his previous studio album 'Rock Bottom', and from Renegade Creation, the band he formed with Robben Ford, as well as two instrumentals to finish the night. 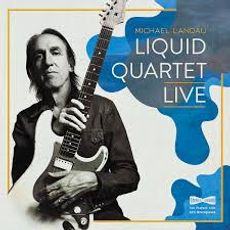