The earliest days of blues music has its roots in the deep South region of the United States.

It was there that the likes of Robert Johnson, Charley Patton, Big Bill Broonzy, and innumerable other performers cut their teeth, performing and recording largely across the states of Tennessee, Mississippi, and various other deep Southern states, gradually spreading to its most famed hometown of Chicago, Illinois. Oft forgotten in these stories is that of the Carolinas, and the surrounding Atlantic Coast. Frequently overshadowed by their Memphis, Chicago, and Mississippi contemporaries, it's an area that contains some of the blues' oldest traditions. This region was home to major traditional blues players like Blind Blake, Tampa Red, and Sam Butler, among many others, and are collected here in the tracks of Guitar Wizards 1926-1935. 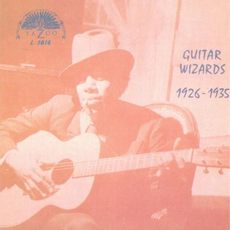