Unfollow The Rules: The Paramour Session


Praised by the New York Times for his “genuine originality,” RUFUS WAINWRIGHT has established himself as one of the great male vocalists, songwriters, and composers of his generation.

The New York-born, Montreal-raised singer-songwriter has released ten studio albums to date, three DVDs, and three live albums including the Grammy-nominated RUFUS DOES JUDY AT CARNEGIE HALL. He has collaborated with artists such as Elton John, Burt Bacharach, Robert Wilson, David Byrne, Boy George, Joni Mitchell, Pet Shop Boys, Heart, Robbie Williams, Jessye Norman, Billy Joel, Paul Simon, Sting and producer Mark Ronson, among many others. He has written two operas, numerous songs for movies and TV, and is currently working on his first musical. His latest GRAMMY® and JUNO nominated album, UNFOLLOW THE RULES, finds Wainwright at the peak of his powers, entering artistic maturity with passion, honesty, and a new-found fearlessness. RUFUS WAINWRIGHT: UNFOLLOW THE RULES – THE PARAMOUR SESSIONS sees Wainwright performing songs from his GRAMMY® Award-nominated 2020 album, UNFOLLOW THE RULES, along with other classic songs from his extraordinary canon, recorded live in a beautiful ballroom at the famed Paramour Mansion in Los Angeles. He’s accompanied by a guitarist, pianist and string quartet. The set list features two previously unreleased songs “Treat A Lady” and “Happy Easter.” The concert – which first premiered last summer in partnership with ALL ARTS and the WNET Group – includes a striking new rendition of UNFOLLOW THE RULES’ “Peaceful Afternoon,” available September 10th. “A stately pop throwback full of (Wainwright’s) signature vocal grandeur… It’s a lush, grandiose place to be if you’re looking to get lost.” –ROLLING STONE “An opulently crafted highlight reel, a career-spanning sampler of Wainwright’s styles and guises…his songwriting is as sharp and cheeky as ever.” –PITCHFORK “Nobody sings quite like Rufus Wainwright, who, in a single breath, channels ennui and high drama while somehow managing to sound vaguely pissed off.” –THE NEW YORKER 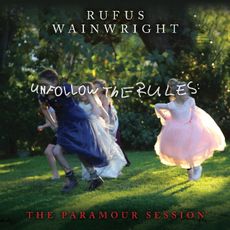