On Slothrust’s latest album, ‘Parallel Timeline’, bandleader Leah Wellbaum pushed herself to try and understand her own spirituality on a deeper level - putting a lens on the core wound of the human experience, the idea that we’re alone.

With ‘Parallel Timeline’, Wellbaum explores the feeling of being trapped inside her own consciousness while simultaneously searching for a meaningful connection to the universe, and all the mysteries it contains. In advance of recording their fifth studio album, Leah, along with drummer Will Gorin, and bassist/producer Kyle Bann, sought to dramatically expand the band’s sonic palette. Slothrust put an emphasis on incorporating new production techniques and processes into the established Slothrust sound, resulting in an extraordinary amount of experimental demo recordings, many elements of which appear themselves on the final record. Leah sought to craft unique and calculated guitar parts instead of continuous bursts of wall-to-wall sound, and in turn delivers what will likely be considered a “how-to manual” for guitar playing in the next decade. Educated musicians all with backgrounds in classical, jazz and blues, the band’s newest work once again sees Slothrust leaning into improvisation -- something that in the past has lent itself to the infectious energy of their live shows. Parallel Timeline, mixed by industry legend Billy Bush and mastered by Heba Kadry, is a masterclass in balancing tenderness with the fierce guitar work Leah has become known for. With a distinct yet unified sound that blends progressive rock, acoustic and pop, Slothrust has never been more confident. 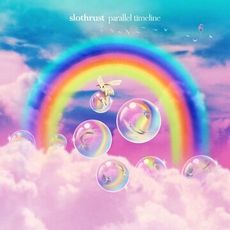