LOTS OF LOVE AND I (first time on cd!)


First CD issue of one of the greatest reggae albums of all time.

All but two tracks new to CD Includes two previously unreleased 12- inch mixes Having become firmly established as one of Jamaica’s premier singer-songwriters in the ‘60s and early ’70s, Bob Andy cemented his place in the pantheon of musical greats with his seminal album, ‘Lot Of Love And I’. Originally released in 1977 on Sonia Pottinger’s High Note label, the LP has since become widely acclaimed as one of the most musically accomplished collections of the roots era, as Andy, backed by some of Kingston’s finest musicians, demonstrates the range of his talents with ten sublime original compositions, including the popular title track, ‘Revelation’, ‘Unchain Me’ and the celebrated ‘Ghetto Stays In The Mind’. Now, 44 years after its original release, ‘Lots Of Love And I’ is finally issued on CD, with its track-listing augmented by four bonus cuts, two of which have remained unreleased until now. If you only ever buy one roots reggae release in your life, this should be it. 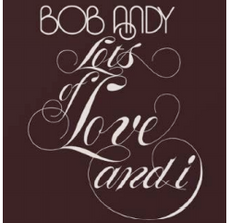