Herrmann wrote the bulk of the score for Vertigo, considered by many critics and by Herrmann himself to be his finest film score, in a little over a month.

Hitchcock places Herrmann’s background music in direct opposition to music that is played deliberately as part of the action of the film. While Herrmann’s score represents the forces of destiny and the mysterious dream world inhabited by Madeleine, music that Midge plays on her radio and record player represents her world and the norms and strictures of conventional society. Herrmann scored the swirling harps and strings that imbue most of the pivotal action sequences in the film to mirror the vertigo that dogs the protagonist. Essential. 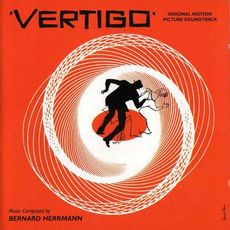