The album is released with 45 minutes of bonus material, issued on a double CD, providing around two hours of music from the game. 'FAR CRY 4' is Cliff's first foray into the world of video game music. invada Label Manager Redg Weeks states "Ubisoft are not only a huge company in the video game world, they put huge emphasis on the soundtrack to their games – the fact they've brought in Cliff to score 'FC4' shows the lengths they go to deliver a real top-notch overall product." 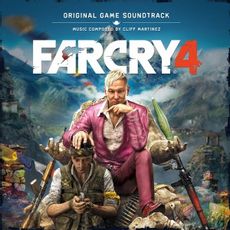