The films are a pseudo-documentary loosely based on the non- fictional book Schulmadchen-Report by sexologist Gunther Hunold. The book presented interviews with twelve teenage girls on their sexual lives. The first episode in the series was a commercial success in 1970, topping the German cinema charts for weeks. Its music by German film composer Gert Wilden combined beat lounge and acid rock. From 1956 through his retirement, he scored music for more than 50 feature films in numerous genres. However, he is perhaps best known for his music for erotic films in the 1970s, like Die Dressierte Frau (1969), Madame Und Ihre Nichte (1972) and especially the Schoolgirl Report (Schulmadchen Report) series. • LIMITED RECORD STORE DAY EDITION • 1000 NUMBERED COPIES ON PINK VINYL 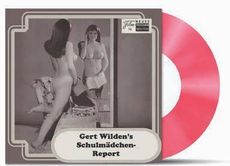