One of the most famous scenes in popular cinema is without a doubt the shower scene in Alfred Hitchcock's 1960 masterpiece ‘Psycho’.

The soundtrack of screeching violins, violas, and cellos was an original all-strings piece by composer Bernard Herrmann, titled "The Murder". Hitchcock insisted that Bernard Herrmann write the score for Psycho despite the composer's refusal to accept a reduced fee for the film's lower budget. The resulting score is perhaps Herrmann's most spectacular Hitchcock achievement. Hitchcock was pleased with the tension and drama the score added to the film, later remarking "33% of the effect of Psycho was due to the music." • LIMITED RECORD STORE DAY EDITION • 2000 NUMBERED COPIES ON RED VINYL Herrmann used the lowered music budget to his advantage by writing for a string orchestra rather than a full symphonic ensemble, contrary to Hitchcock's request for a jazz score. He thought of the single tone color of the all-string soundtrack as a way of reflecting the black-and-white cinematography of the film. 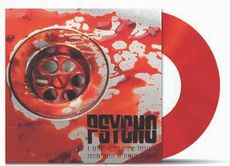