Nightsatan & The Loops Of Doom

Nightsatan And The Loops Of Doom - Original Soundtrack


NIGHTSATAN caught the ear of the attentive laser metal enthusiast with their debut album, Midnight Laser Warrior, in 2010, and now the trio debut as movie stars in Nightsatan And The Loops Of Doom.

The movie draws inspiration from the very same source the band does: '80s post-apocalyptic science fiction. The synth trio NIGHTSATAN hail from the doomy city of Turku, Finland, and they place themselves in the post-apocalyptic laser metal genre. In the beginning, the synth warrior Wolf Rami envisioned the band's music as "the soundtrack to Miami Vice meets heavy metal." During their career, the band's sound has extended to both ends of that spectrum, and the synth-metal riffs of the early material have given way for a more progressive and atmospheric approach. Given the international cult fame gained with the already quite cinematic debut album - with kudos given by the likes of Monocle, Empire, and Popvoyage - and live shows in their native Finland and Sweden, it is fitting that the trio's next step is a movie soundtrack. Directed by Chrzu, better known as the director of animated films such as Curse of the Remote Island (2008), Nightsatan and the Loops of Doom is a proud tribute to vintage Italian post-apocalyptic sci-if. It is a very unusual short epic, full of sex, violence, and general sense of wonder. The soundtrack album is a considerably more epic and measured affair than its predecessor. Recorded and produced by the band's second keyboard wizard Mazathoth, the album features full-length versions of all tracks from the movie. A word on Christer Lindström's half-hour short Nightsatan and the Loops of Doom. Nightsatan are a Finnish electro band, and the film is a kind of post-apocalypse western in which the band appear as wandering freaks: a Mad Max-ish archer, a robot thing and a skeleton thing. Lindström told me he watched El Topo a lot during production. In a really good way, you can tell. It's about a grotesque, egg-laying transvestite and his malfunctioning android son who are wandering a desert wasteland catching warrior women, burying them up to their necks and trapping them in short, sonically punishing temporal loops. The band - who bitch at each other a lot and are horny - aren't standing for that, so decide to put a stop to it, finding that they can combat the loops because their music is triangular. Or something. The eggs turn out to be significant. Oh, and it was shot in English but then dubbed into Italian and subtitled. Ridiculously, it works perfectly To my ears they sound like John Carpenter's soundtracks, to the extent that they do a cover of Assault on Precinct 13 (although they kind of play it the Bomb the Bass/ Xenon II way). 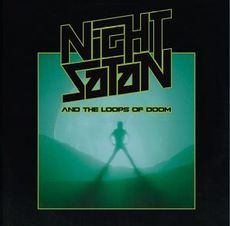