a huge part of the success of the harry potter movies has been down to the amazing soundtrack that crosses everywhere between the stunning ennio morricone and the brilliant emotive work of Joe Hisaishi for studio ghibli.

turning darker for the deathly hallows, desplat has made the perfect soundtrack for some of the most breathtaking hollywood cinematography in recent years, earning himself a grammy nomination and winning the san diego film critics film society award for best score. 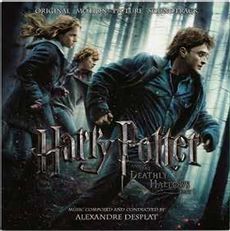