those wonderful folks over at deathwaltz have served up something brilliant here - a fantastic double album of some of the weirdest and most warped horror sci fi sounds to come out of the brilliant brain of nico fidenco.

delivered on blue and green swirl vinyl looking every bit as terrifying and cartoonish as the subject, it's another great piece from the undoubted masters of horror and sci fi reissues. Melding both Lucio Fulci’s ZOMBI 2 and Ruggero Deodato’s CANNIBAL HOLOCAUST (hence the title), Girolami’s film pits an army of flesh-eating cannibals against members of the undead, with a group of nosey Americans caught in-between, to be feasted and experimented upon. Fidenco goes everywhere and anywhere for this score, with thumping bass that wouldn’t sound out of place at a rave and the best jazz-flute this side of Jethro Tull. Synthesiser lines drift through the score like a fog, ranging from melodic new wave to dissonant and foreboding, while haunting female vocals inject the music with a pseudo-porno feel. And of course, there’s the traditional tribal percussion, as well as a healthy dose of church organ - Fidenco isn’t afraid of going anywhere and as a result you have a truly unique and absolutely mental example of zombie/cannibal film music. 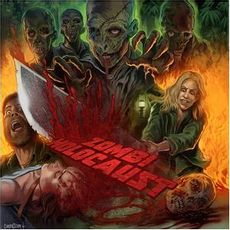