Countless movie-goers who have never heard of Bernard Herrmann nevertheless are quite capable of immediately recognizing his most famous motion picture score -- the score for the 1960 Paramount film Psycho. Director Alfred Hitchcock's budget for Psycho was not very large, and Herrmann was forced to restrict himself to a relatively small instrumental ensemble. The result is a score composed entirely for string instruments that perfectly suits the stark black and white cinematography of the film. 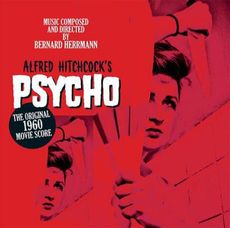