This is the soundtrack to the first film of Chan-wook Park’s Vengeance trilogy, released in 2002. The film is a crime thriller that follows a botched plot to kidnap the daughter of a small business owner, the plan having been to use the ransom money to pay for a kidney transplant. When the child is accidentally killed, the situation flies out of control as the plot unfolds unpredictably. The film portrays the aspects of human psychology as the protagonists are pulled into the maelstrom, while also focusing on the nature of evil. The soundtrack was provided by UhUhBoo Project, an experimental unit by Hyun-jin Baek (singer) and Young-gyu Jang (producer / bass) who seek to fuse local traditional music with avant-garde /contemporary rock. This is an astounding soundtrack that includes several experimental tracks that fully embody the unique style of UhUhBoo, as well as some folk songs and contemporary pieces. The soundtrack, which was released at the same time as the film, was sold out almost immediately. This left no more copies in circulation, making it nearly impossible to find in its entirety. This vinyl issue is the first reissue of this soundtrack since its original release in 2002. 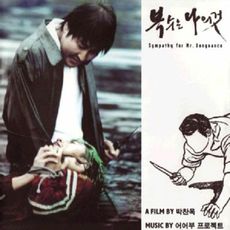