remastered & released on vinyl for the first time outside of japan, this gathers The complete music from the 1985 arcade classic.

Space Harrier is perhaps most memorable for its lengthy & melodic opening theme, in which SEGA’s renowned in-house composer, Hiroshi “Hiro” Kawaguchi (OutRun, After Burner), armed with a Yamaha DX-7 & the most minimal of resources, sought to recreate the sound of a full band. In doing so, he defied the technological constraints of the time & inspired a generation of game composers, including Yuzo Koshiro (Streets of Rage), who has since cited Space Harrier as a defining early influence. Looking beyond its iconic main theme however, Space Harrier also shows Hiro playing with a range of sounds & styles, from infectious loops & jaunty battle themes, to the doomy & surprisingly bass-heavy WIWI JUMBO. 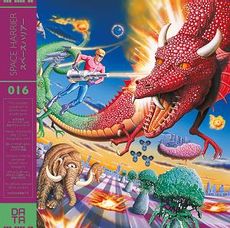