Mondo Music, in partnership with Marvel, are proud to present the soundtrack to the Netflix original series Marvel’s Luke Cage Season Two.

The all new score by composers Adrian Younge (Venice dawn, Ghostface Killah) and Ali Shaheed Muhammad (A TRIBE CALLED QUEST) is an incredible follow up to one of the best scores of 2016.Set in the aftermath of first season, our hero has finally cleared his name but finds himself up against an all new opponent that threatens Harlem...the mysterious and powerful Bushmaster. Recorded in the Winter of 2018, in Los Angeles California, at Blakeslee Studios and Linear Labs Studios by composers Adrian Younge and Ali Shaheed Muhammad, the score to Luke Cage Season Two is just as epic and powerful as the first. Exploring the vast sonic cultural landscape of Harlem, Adrian and Ali have introduced a dub-reggae motif for the character of Bushmaster, on top of the classic themes that made the original soundtrack so essential. 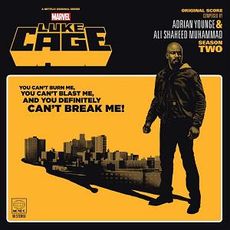