one of the greatest dub releases to come out of the finest period in jamaica reggae – the mid 70s. tappa zukie (born david sinclair) had become producer bunny ‘striker’ lee’s right hand man within the late night recording sessions that took place in the 1970s before taking on solo production duties himself. working with 8 rhythms that bunny had given him & a further 2 rhythms (1 being from producer jo jo hookim, which would become ’m.p.l.a.’ &  the other from producer ossie hibbert, soon to turn into ‘pick up the rockers’) these would become the back bone to tappa’s ‘in dub’ album. a stand alone classic that few have bettered. 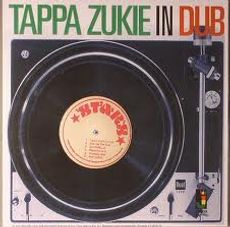