a totally natural fusion of reggae & jazz that more than 25 years after it was recorded still sounds totally fresh & joyous.

An influential figure on the Bristol reggae scene since the 1970s, Bunny Marrett has been shamefully neglected on record with just two tracks being his sole output until now, although his compositions have fared somewhat better having been recorded & released by both Black Roots and Delroy Ogilvie. Bristol Archive Record's release of Bunny's 1986 recorded album 'I'm Free' should go some way to making up for that oversight. As a bonus, Bunny is accompanied by legendary Bristol band The Startled Insects & equally legendary local jazz drummer Tony Orrell. 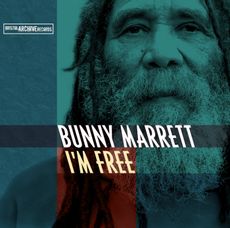