guess who's coming to dinner : the best of


In the wake of Bob Marley’s passing in 81, harmony trio, Black Uhuru became the undisputed leaders of Roots Reggae in Jamaica & beyond.

Originally formed by Derrick ‘Duckie’ Simpson in the early 70's, it was not until the group’s collaborations with Sly & Robbie, that their music finally received international acclaim. Although their Island singles proved a little too strident for non-Jamaican chart action, the group’s albums attracted widespread acclaim. this collection brings together Black Uhuru’s most important works for Island, along with their two UK chart hits, ‘What Is Life’ & ‘The Great Train Robbery’. 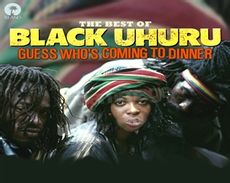