recorded in england by great jamaican session players, the instrumental album 'rebel rock' derives most of its rhythms from errol dunkley’s 'sit & cry over you'.

born out of the soundsystem developed by ephraim barret (aka count shelly), the 'rebel rock' album was released by shelley & produced, arranged, & probably engineered, by the great sid bucknor. the title track ‘rebel rock’ was originally derived from gene rondo’s single ‘rebel woman’ issued by shelly on his queen bee subsidiary in 1974 & the track that opens side two ‘black moon’ is from the ginger williams single ‘there is something in my heart’.  as is usual when quality jamaican sessioneers get together free quotes from jazz standards & ballads can be found interspersed with re-utilised rhythms, so ‘repatriation remedy’ can not only be traced back to errol dunkley’s ‘repatriation’ but also to bunny & skitter on their studio one single ‘lumumbo’ & even before that willie bobo’s ‘spanish grease’. 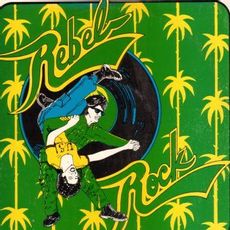