During the long, hot summer of 1966, Jamaica’s national sound underwent a dramatic transformation.

The Ska rhythm that had dominated the island’s music scene since its independence in 1962 slowed significantly, so providing dancers with the opportunity to enjoy themselves without suffering heat exhaustion. Early in 1967, this new, more measured style acquired a name of its own, Rock Steady, & for the next 2 years, the style remained the prevailing sound in Jamaica, with many of the most popular recordings in the genre released in the UK on Chris Blackwell’s famed Island Records imprint. By the close of 1968, Rock Steady had been supplanted by Reggae & Blackwell was involved with a new Jamaican music company, Trojan Records, but before these momentous events, Island Records was at the forefront of the sound in the UK, as reflected in the music on this essential 40 track 2 disc collection. 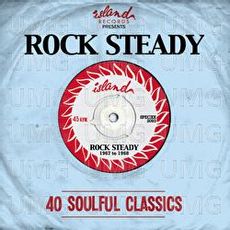