Dubbed the father of Lover’s Rock & widely acclaimed as one of the finest talents the island has ever produced, ellis began his illustrious career in the late 50s before going on to write & perform a some of the best-selling Ska, Rock Steady & Reggae singles ever to see issue.

His run of major hits came to a premature close following his relocation to Canada in the early 70s, a move that was marked by the release of one of the best-selling Reggae long players of all time, ‘Mr. Soul Of Jamaica’. Released in the UK as the aptly titled ‘Greatest Hits’, the LP collected a dozen of Ellis’ best-loved hits for Duke Reid’s Treasure Isle label. Despite regularly being acclaimed by fans & connoisseurs alike as being one the greatest Jamaican music LPs of all-time, it has until now never received an official reissue. Now, bolstered by the remainder of Ellis’ Treasure Isle output, including 6 recordings new to CD, this essential collection is a must for all fans of classic Jamaican sounds. 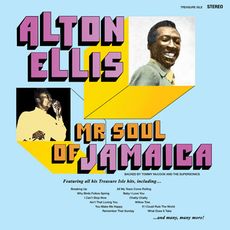