king tubby’s hometown hi-fi was one the great sound systems in jamaica & proved a fantastic outlet for the dub plate specials cut at tubby’s studio.

the sound system provided exclusive cuts to be played out & to entice the dance’s audience. the tracks at the time were mainly cut over producer bunny ’striker’ lee rhythms, that bunny stored at tubby’s studio. the versions were given exclusive plays at tubby’s sound before some found their way on to vinyl, as the b-side version cut to its a-side vocal, proving so popular that the records were often brought for its version side over its vocal counterpart. this cd compiles a selection of cuts that were all tried & tested on tubby’s home town hi fi sound system & worked a great set of bunny lee’s rhythms in fine style. 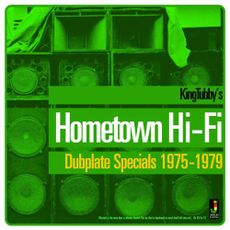