Both sides of this 10' are deep roots that come with a full on percussive production that gives Winston Jarrett an excellent platform to perform on.

A hot stepper from Winston 'Flames' Jarrett. Produced by Roy Cousins this is the first time this full mix has been re-issued since in original early '80s release. The one time harmony singer to Alton Ellis, Winston Jarrett was born in Saint Anns before moving to Kingston. An early member of the Flames he moved on to record for Duke Reid before doing the rounds as an in dem& session singer. The 'Wise Man' album is still in dem& although this extended version was not on the album. Re-released on Roy Cousins 'Uhuru' label which was Roy's first label before the inception of the Tamoki- Wambesi imprint. 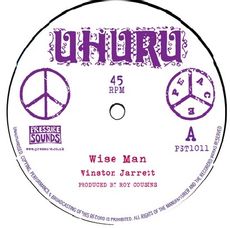