Massive 1984 Roots Radics backed superstar clash produced by Henry 'Junjo' Lawes at Channel One with Soldgie at the controls - King Yellowman and the Colonel face off Volcano style! By the time of this 1984 meeting with the biggest dancehall star of the early dancehall period, Yellowman, the musical outlaw, josey Wales, had honed his hoarse-toned & rangy delivery to perfection.

The resulting album, which avoids the sad fate of many a marquee date, is one of the highlights of the period. Besides some top toasting, the album also features superb backdrops from Lawes and the Roots Radics. 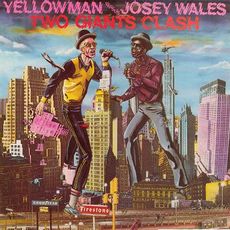