The One Eyed Giant


Little seems to be known about King Sighter the artist, other than a few record releases and sleeve notes that appear on the back of the original LP cover which state he was a 24 year old who apparently lost his eye in a factory accident.

Compared in style to the magnificent DJ artists I Roy and Big Youth, King Sighter's ‘The One Eyed Giant’ album was originally recorded and released in 1978. Sighter was a veteran Jamaican toaster who often dressed up as a pirate or a king as seen on the UK LP cover for his appearances. The album 'The One Eyed Giant' is regarded a long lost classic, mostly due to Phil Pratt's killer production which drew on riddems from tracks like Al Campbells 'Foot Stool', Delroy Websters 'Book Of Love' and Ken Boothe's 'Who Gets Your Love'. The final article is pure magic for fans of DJ reggae. 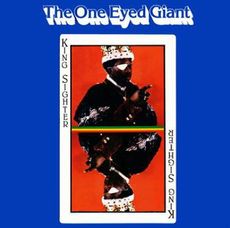