“Spanning a period from the late '60s to the early '80s, this Trojan compilation makes for a fine introduction to reggae's golden years.

It's also filled with enough obscure material to appeal to even the most involved fan. The emphasis in the mix is not so much on dense, Rasta-themed cuts as  on buoyant, dancehall-flavored material. Bubbly standouts include Delroy Wilson's ‘We're Gonna Work It Out’ and Janet Kay's very agreeable cover of the Minnie Ripperton hit ‘Lovin' You’. More secular nuggets come from a star-studded cast comprised of Don Carlos, Gregory Isaacs, Barrington Levy, Alton Ellis, the Heptones, and Pat Kelly. Special mention should also be made of Tony Jay's original version of ‘Telephone Line’ and Dennis Brown's very soulful cover of ‘Black Magic Woman’  On the more cultural-minded front, there's fine tracks like the Mighty Maytones' ‘Madness’ and Little Roy's ‘Touch Not My Locks’. Top things off with contributions from the seldom heard Fred Locks and the Morwells, and Burning Up qualifies as a very good bet for reggae lovers.” AllMusic 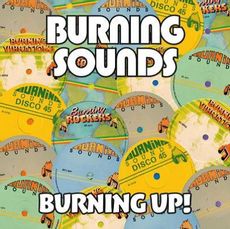