This 2cd collection brings together the  first recordings released outside of their native Jamaica in the 70s by the legendary reggae troupe.

After making their recording debut during the rock steady era of the late sixties, the Gladiators enjoyed modest success before commencing a hugely successful working relationship with Kingston-based producer ‘Prince Tony’ Robinson in 1976. The best of these recordings subsequently featured on 3 popular albums: ‘Trenchtown Mix Up’ (1976), ‘Proverbial Reggae’ (1978), ‘Naturality’ (1979), while a fourth, self-produced LP, ‘Sweet So Till’ ensured that as the decade drew to a close, the Gladiators were firmly established as one of reggae music’s leading acts. Yet despite the long-standing popularity of their work, only 3 of this quartet of albums have to date been rereleased in any format, with the outstanding ‘Naturality’ inexplicably unavailable since the year of its original issue. All four are brought together here, plus extras. 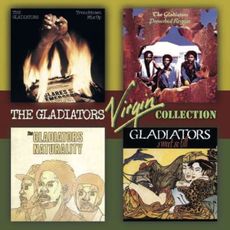