STUDIO ONE Rocksteady 2: The Soul Of Young Jamaica - Rocksteady, Soul And Early Reggae At Studio One


Soul Jazz Records’ new journey into the mighty vaults of Clement Dodd’s Studio One steps once more into the fertile musical environment of Jamaican music in the late 1960s & early 1970s, from the sweet harmony vocals of seminal 1960s Rocksteady, right up to the nascent birth of Reggae & Roots music at the start of the 1970s.

While Ska at the start of the 1960s had taken American Rhythm & Blues as its main influence, Rocksteady focused on the emergence of American Soul music - with Jamaican vocal harmony groups such as The Gaylads, John Holt & The Paragons, Carlton & The Shoes showing a particular fascination with the close harmonies of Curtis Mayfield & The Impressions and other US Soul acts. Here, even The Heptones feature with a cover of Bob Dylan’s ‘I Shall Be Released’. 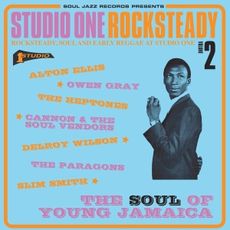