Spirit of 69: The Trojan Albums Collection


Spirit of 69 is the essence of the original skinhead era of the late Sixties.

Borne of Britain’s working-class estates, the no-nonsense sub-culture that widely recognised in early boss reggae a sound that matched their outlook, changed styles and attitudes forever. Fashion and music would never be the same. In 1969 reggae and the skinhead look hit the big time in the UK. The fortunes of the music and new look were of course closely intertwined, with skinheads largely instrumental in propelling the music from Jamaica into the British charts. But while the singles and albums that became hits have since provided the focus for numerous compilations, the lesser known records, bought by the die-hards and aficionados, have been largely overlooked. This stylishly designed CD clamshell release helps set things straight by comprising faithful reproductions of 5 of the most collectable Trojan albums that attracted fans of the new reggae style throughout the latter half of ’69. Also included in the package is a 16-page booklet featuring a fascinating background information on each of the albums and an array of fascinating imagery. This essential collection forms part of Trojan’s 2019’s ‘Spirit Of 69’ campaign, which celebrates the half centenary of the year that reggae hit the British charts and the original skinhead generation hit the streets 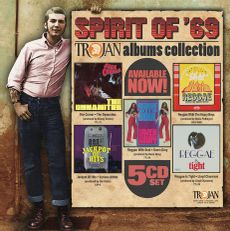