When the NYC ska scene germinated in parallel to the UK Two-Tone movement, the Max’s Kansas City club was at the heart of it. The clubs pioneering record label, run by Max’s booker Peter Crowley, recorded a number of sessions in 1980, including with legendary Skatalites founder Roland Alfonso. But only two 7” singles, by San Francisco’s The Offs and NYC’s The Terrorists, ever got issued. Subsequently the NY ska scene exploded, with many bands achieving great success. Only now can these previously unreleased studio tracks by Roland Alphonso, The Terrorists and The Offs be heard. The album has 15 tracks, eleven of which are issued for the first time, and it comes with authoritative sleeve notes by ska writer and player ‘Marco On The Bass’. 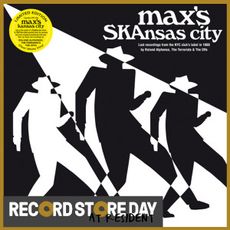